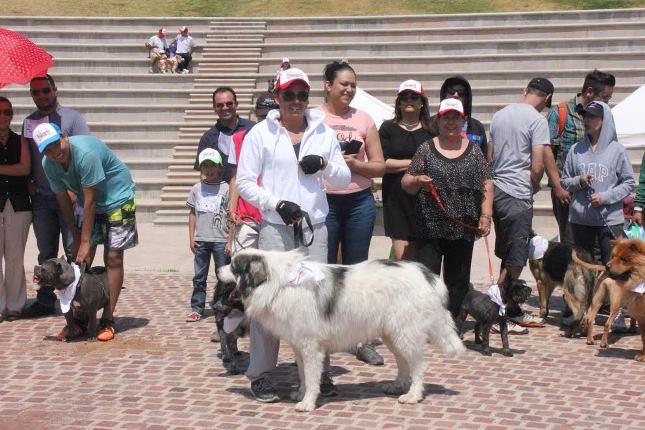 Zacatecas. It was the first walk barking sound called Walking the dog in the park Arroyo de la Plata

With a great participation of families and their pets perrunas was carried out on the first walk, called Walking the dog, in the open-air theatre in the park Arroyo de la Plata.

From 9 o’clock began the concentration of people accompanied by their dogs, although they came many who were not, so they provided one of those who are in adoption, with the aim of seeking to do chemistry and, perhaps, stay with them, as well as demonstrating against animal abuse.

Luis Eduardo Aguirre Ortiz, owner of the Institute of the Youth, reported that they were 280 people with their dogs, most 27 which led to the association of Dog Love, same that participated in the walk with the collaboration of volunteers.

Of these, six remained with them for what they are formalized its adoption.

The participants started the walk began at the outdoor theater, came to the back of the Walmart store, and returned to the stands mounted, where there were hydration for humans and dogs.

The association Provedusa, like that Dog Love and Committed Young people also participated, both in the organization as well as in the dissemination, to the attention of participants and the raffle prizes, which consisted of a year of food and six months of cosmetic canine, among others.

In both the veterinary K-9 gave a demonstration of skills with dogs tamed, that exercises of defence and obedience.

Ariel Pargas Pineda, secretary of Social Development attended on behalf of the municipal president Judith Guerrero Lopez, as well as the holder of the Secretariat of Planning, Raymundo Moreno Romero, and the councillor Mariana Anaya Mota.

In the parque Enrique Estrada was the annual day of neutering dogs and cats in which care was provided to 123 pets and was attended by close to 200 people at the call Control Center’s Canine and Feline (CACF).

Participated associations as Croquetos, Kerubines Furry, Love, and Life and Animal rescuers to separate those who were given , in total, 16 awards.

The trustee Jose Encarnacion Rivera Muñoz, and councilman Heladio Gerardo Verver y Vargas Ramírez lived with the people and noted the great effort that the CACF for the dogs in the street and to combat the proliferation of dogs and cats.

Rivera Muñoz highlighted the wide participation of the private initiative in an activity for which we are responsible to all, the authorities and the population in general, therefore, stressed the need to create awareness in the care of pets, and to eradicate animal abuse.

Xochitl Villanueva, director of the CACF, thanked the collaboration of benefactors who contribute time, money and effort in the care of the pet, and recalled that the campaign of donation of kibble is permanent, and therefore urged the public to continue to provide such valuable support.

In the same way were applied to 70 rabies vaccine and there was an adoption in place, although the associations were also pets available.