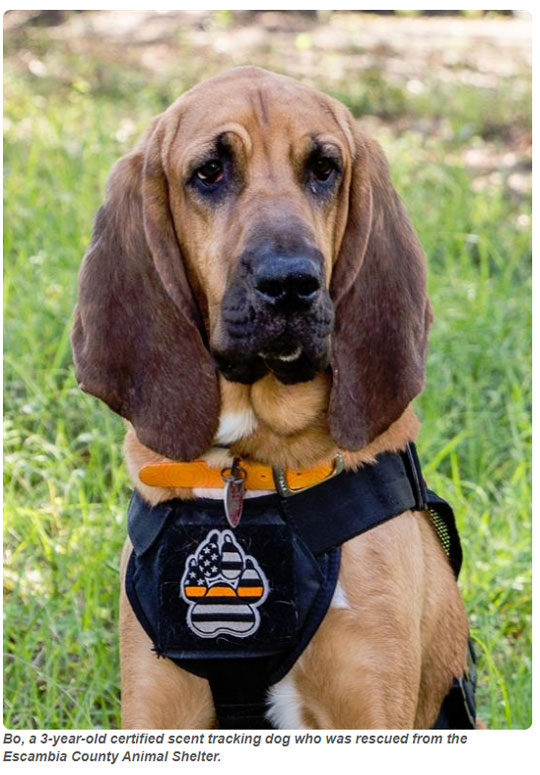 Each Saturday morning, Escambia County Animal Control Supervisor Kevin Monfreda and his 3-year-old bloodhound, Bo, visit campuses and parks along the Gulf Coast. The two aren’t stopping in for a game of fetch or a jog — they’re rigorously perfecting Bo’s skills as a scent trailing dog.

The pair has been working together since July 2015, when Monfreda adopted Bo from the Escambia County Animal Shelter after Animal Control officers removed the 7-month-old puppy from an animal cruelty situation.

“He was so cute, and we just really bonded,” Monfreda said.

After two years of training and miles of scent tracking across various terrain, Monfreda and Bo are now certified by the North American Police Working Dog Association as a scent trailing team.

“When we first started training, we’d do short runaway sessions, where the handler gets the dog excited, then drops an article of clothing and runs away out of sight, creating a scent trail,” Monfreda said. “The trails are marked with scent flags at first, and then as the dog gets older and more experienced, you take away the flags and continue adding more turns while lengthening the trail, so they have to look hard for the scent.”

The pair are now part of KLAASKids, a nationally recognized volunteer search and rescue organization that provides search managers, planners, field searchers and K-9s to search for missing and trafficked children. Monfreda and Bo have participated in three active searches for missing children. 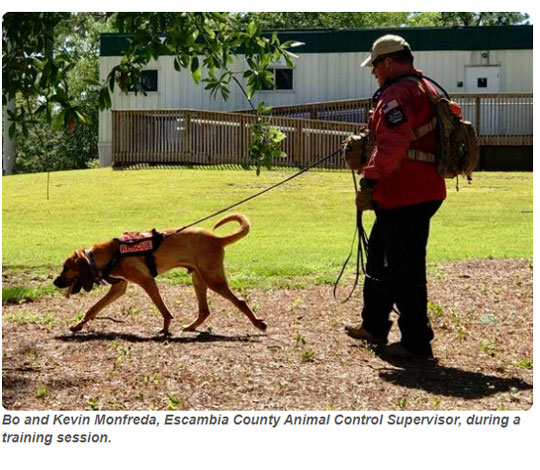 In addition to the weekly Saturday training sessions with other teams in the area, Monfreda and Bo attend regional seminars and training events. The two will attend their next seminar on Saturday, Nov. 10 in Sarasota, Florida, which will focus specifically on urban scent trailing.

“He really likes the urban seminars– it makes him think,” Monfreda said. “He enjoys the challenge. He’s a laid-back dog, but he really likes to work.”

Another county working dog who got her start at the Escambia County Animal Shelter is 5-year-old German Shepherd mix, Britt.

Britt was picked up as stray by Animal Control officers in 2015 and was taken to the Escambia County Animal Shelter and made available for adoption. She was adopted shortly after she was placed at the shelter, but was quickly returned.

Officer Robert Oliver and Sgt. Boswell of the Escambia County Road Prison were visiting the animal shelter to check on an inmate performing work duties when they noticed Britt in her kennel.

“She seemed attentive and trainable, so we took her out of the kennel and went over to an exercise pen and believe it or not, she already knew verbal commands and had a very high toy drive,” Oliver said. “She just loved to play ball, and that’s actually what we use to start training our narcotics dogs.”

Oliver noted that dogs with an extremely high toy drive make great narcotics tracking dogs because of their relentless desire to find an object or toy.

After seeing Britt’s toy drive and trainability, Oliver decided to pull her from the shelter to work as a narcotics dog for the Escambia County Road Prison. Oliver enrolled Britt in a training course with the Escambia County Sheriff’s Office, and she successfully completed 240 training hours and received her certification from the United States Police Canine Association.

“She comes to work with me every day and while the inmates are working on the roads, she’ll do a housing area search,” Oliver said.

The Road Prison also has four call beagles and one call bloodhound that make up the rest of the tracking team.

In 2016, Britt competed in the Southern States Manhunt Field Trial and placed fourth in the narcotics search. She returned in 2017 to compete in the same search and came in second place against 17 other dogs.

“She was the only dog who placed in the competition that came from a shelter,” Oliver said. “She’s a sweetheart and a hard worker.”

“She’s a great working dog a and real asset to our team,” Oliver added.

The two are preparing for Britt’s next Southern States Manhunt Trail competition in 2019.

John Robinson, Animal Services manager, said his staff is always looking for dogs that come into the shelter that might make great tracking or search and rescue dogs.

“Escambia County Animal Services is really proud to see dogs that come from our shelter helping people and also representing shelter dogs in a positive light,” Robinson said. “Great dogs and cats can come from any animal shelter and be great additions to families, and sometimes they can even become productive members of a team.” 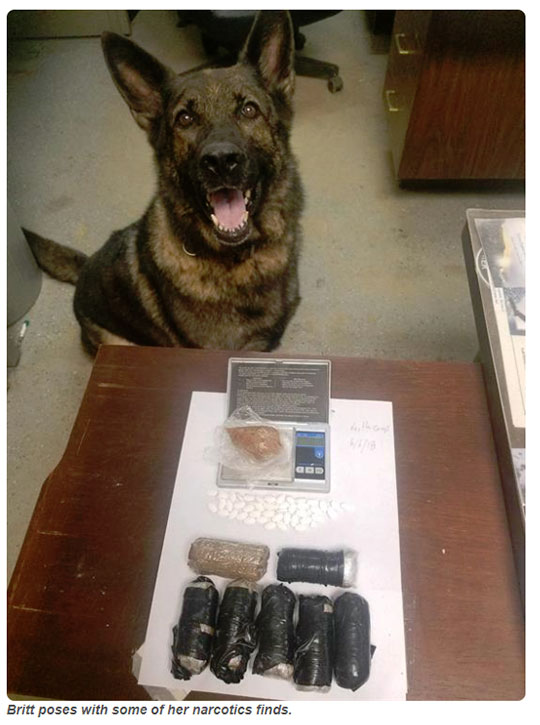