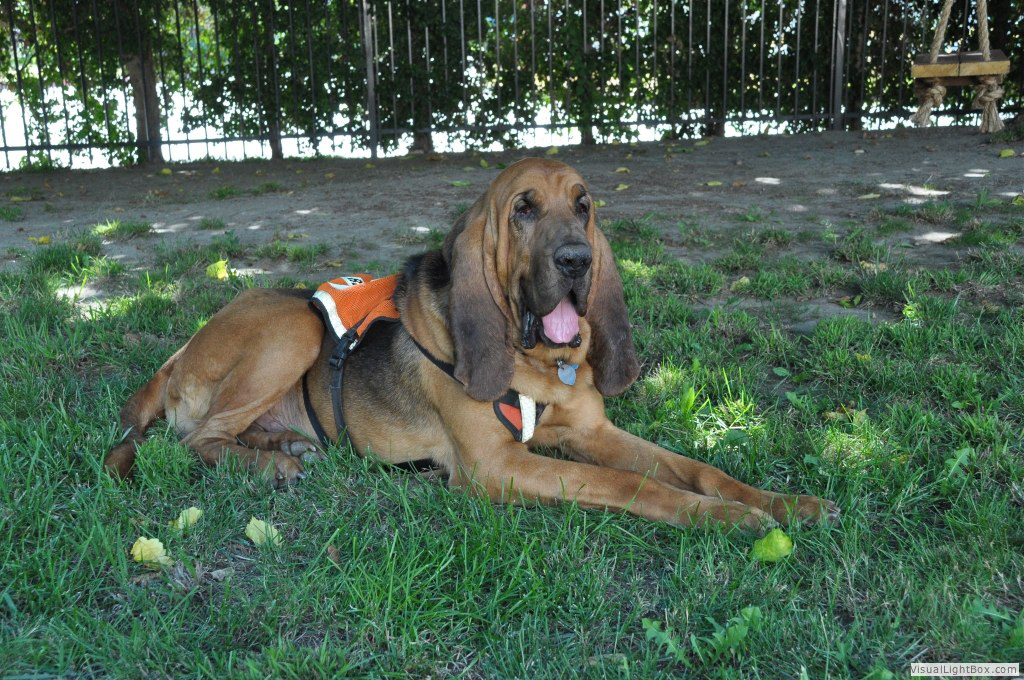 Inspector Gadget, a Bloodhound, is one of five, loyal companion dogs who won the 19th annual AKC Humane Fund Awards for Canine Excellence (ACE). The winners will be honored at the AKC National Championship presented by Royal Canin in Orlando, Florida, December 15-16, 2018.

Make no mistake about it, search-and-rescue work is all about commitment — with heaps of flexibility.

Take, for instance, Bob Wells, of Lancaster, California, and his 11½-year-old Bloodhound partner, Inspector Gadget, the 2018 AKC Humane Funds Awards for Canine Excellence (ACE) Search and Rescue Dog winners who have been deployed dozens of times in a decade.

“There is a SAR hierarchy of priorities,” he explains, “ (1) home; (2) work; (3) SAR. One of the most important resources in SAR is an understanding and supportive home life. Having a partner that is also involved lets us ‘pre-stage’ our activities. For instance, when the phone rings and we have to go, being able to have a preplan helps enormously. I grab the radios, maps, and GPS and get the vehicle ready while Lori, my wife, gets the dogs and their gear ready.”

Bob Wells, an engineer/program manager for a job shop that manufactures a variety of commercial, aerospace and military components and complex assemblies, says, “My 10,000-plus hours of emergency training effectively volunteered my participation on the shop’s safety team as payback for my employer allowing me to drop and go when there’s a callout for a missing person.”

Finding time to train and deploy “just happens,” he acknowledges. He is accustomed to dedicating a Saturday or Sunday weekly for group training, plus four to five hours during the week. Training is primarily in Southern California and Southwest Nevada, chiefly within 100 miles of home. “Living in Los Angeles County, where seven of eight ecosystems exist — we don’t have temperate rain forest — allows and requires a diversity of terrain nearby. In training, it’s not always about the amount of time; it’s more about the quality and focus.”

Wells has been involved in SAR work since 1997, and partnered with Gadget for 10 years. But his introduction to the pursuit was fraught with a catalog of challenges at the outset with Hogan, a 3-year-old Australian Shepherd.

“There are easy dogs to train and work with, and there are some that are more difficult,” he explains. “Hogan (named after actor Paul Hogan) was a real rascal. He was gifted to me because his owners lost patience with his antics. The day I adopted him he had made his way to a neighbor’s house and bit a stubborn goat that didn’t like being herded and run out on an adjoining golf course. Then Hogan proceeded to steal golf balls from a group of Japanese businessmen competing in a golf tournament.”

Consequently, Wells wasted no time enrolling Hogan and himself in a local obedience class. Hogan gradually became Wells’ “buddy dog,” prompting the owner to explore options for harnessing the Aussie energy. He settled on two — sheep herding for sport and SAR. Groups representing each pursuit held meetings the following weekend — SAR on Saturday and herding on Sunday. “I was so enamored with the SAR people I didn’t even attend the herding session.”

If he wanted to continue to pursue SAR, it meant focusing on another breed. Wells considered the Labrador Retriever and German Shepherd but was impressed with the abilities and potential of the Bloodhound.

Where Hogan was an Area Dog (worked off-lead, grids, finds and alerts to all humans in their assigned area), the team Wells was primarily deploying with had a need for a Trailing Dog (works on-lead, trails a specific person, after sniffing something that individual touched) because the unit was receiving chiefly urban and suburban calls for response.

“I saw a chance to work with several seasoned Trailing Dog handlers who offered to mentor me,” recalls Wells. “A team member, who was later to become my wife knew of a litter of Bloodhound puppies. Consequently, I ended up with my first Bloodhound.”

Wells later acquired Gadget and began working him at age 4 months while Lori Wells was exhibiting him in conformation, where she was training him to gait smoothly with his head upright. Outside the ring, Bob was working him on scent — with his head following where the scent gathers — sometimes up, sometimes down. “That made for an interesting scenario,” he laughs.

The 95-pound Gadget, named after the cartoon character, spent parts of two years in conformation before segueing totally to SAR work.

“He is just a happy boy who enjoys following a scent trail,” says Wells. “There are learned behaviors, and there are instinctive behaviors. Gadget has learned he can depend upon me to help him enjoy his instinctive hunt abilities. He’s learned that when he becomes confused, he can use me to help work things through.”

The aging Gadget is slowing down these days and relegated to limited service where he does trailhead identification, location checks and direction of travel — each of which requires limited physical effort.

Despite his age, “he absolutely loves the game,” says Wells. “He’ll sleep all the way to training or a search, but once he’s out of the vehicle, he struts proudly in anticipation.”

When asked to recall their most notable searches, Wells replies, “One took us to Mount Charleston, Nevada, to locate a missing man. After trailing from the vehicle and discounting possible sightings, Gadget led the search team to the correct hillside where the subject was found. Though not the hoped-for result, at least the family received the answer they needed.

“On another search in Arizona, Gadget trailed a missing person through town, ending at a bus bench. In checking the many stops along the route from there, Gadget was able to identify where the subject exited the bus. As a result, he was eventually found in the desert.”

Gadget’s excellence extends beyond the ring and trail, however. He has sired many quality litters that have carried forth his drive, dexterity, and work ethic.

Add to that his countless public-relations and television appearances — he loves small children — and savoring quiet time on the couch with his head on Wells’ lap. “He’s earned that right,” Wells smiles.

P.S.: Because of weakness in his rear legs, Gadget will not attend the ACE Awards presentation ceremony in December at the AKC National Championship presented by Royal Canin in Orlando, Florida. His grand pup LeDoux will be accepting the award on his behalf. Gadget will be retired in December and Wells will move forward on the SAR trail with LeDoux.

Learn more about our other ACE winners:

Therapy Dog Works Magic in the Most Challenging Environments

This Golden Retriever is an Award Winning Service Dog