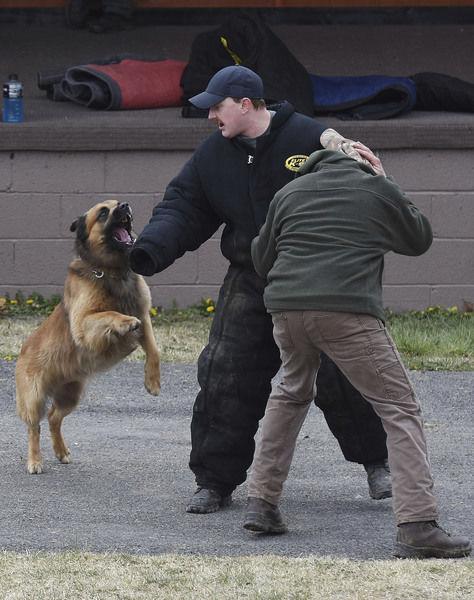 SUMMERSVILLE — The ballfields of the Nicholas County Veteran Memorial Park are one of the various locations playing host to the West Virginia Police Canine Association’s yearly training seminar and recertification events.

Approximately 71 K-9 teams from throughout the state have traveled to the event which is being hosted by members of the Nicholas County Sheriff’s Department and the Summersville Police Department this year.

«It gets our certifications up so when we are working our dogs, we’re a certified team,» said Sgt. Matt Deitz of the Nicholas County Sheriff’s Department adding that the certification is key to being recognized by the courts as an adequate K-9 unit.

While the public may see a police K-9 as a one trick pony, the week’s training has been developed to suit the specific needs of law enforcement and the specific abilities of each dog.

K-9 units receive certifications in the categories of apprehension, tracking and narcotics; with bloodhounds receiving a higher level of certification regarding tracking having to track for miles on tracks which are multiple days old.

The association moves its training to a different location in the state each year, and Deitz said it has been an honor for the Nicholas County law enforcement agencies to host it this year.

Among the dugouts and outbuilding of the park, organizers have stagged vehicles with narcotics hidden in their bodies and hidden packages within buildings.

According to Deitz, the changing location each year allows each K-9 team to test their skills in a different locale and under different circumstances.

With snowfall on the ground on Monday, Deitz added that most teams do not get quality training in the snow and that the event had allowed them to do so.

«It gives us a different outlook on how our dogs will work in different types of weather,» the Nicholas deputy said.

To Deitz, the K-9 team is an essential aspect of good police work.

The Nicholas deputy said that he has always wanted to be a K-9 handler and jumped at the opportunity to do so.

«It is another tool in our arsenal of weapons against crime, against drugs and to help out the citizens of the community,» Deitz said. «But it is also another family member.»

The deputy’s affection for his K-9 partner was clearly evident, and when she reaches retirement age she will become a permanent pet for the deputy.

While retirement is evident for each member of the K-9 team, both dog and human, Deitz added that the pair has been involved in many narcotics searches along with other important emergency events

While the event is set up to recertify the K-9 teams, a great deal of camaraderie is also apparent during the week.

According to Deitz, though law enforcement officers hold a tight bond, the bond between K-9 teams is even greater.

«There are a lot of real good guys here,» Deitz said.

One of those K-9 teams was that of Lt. Nick Mooney from the Fayette County Sheriff’s Department and his K-9 partner Arras.

«It’s good just to have everybody from all over the state, all the different K-9 units, come together,» Mooney said adding that the training allowed the units to bounce ideas off of each other.

As one of the event’s trainers, Mooney’s partner Arras was chomping at the bit to get some training in himself.

According to Mooney, having a K-9 partner is the main reason he has stuck with law enforcement.

«I wouldn’t do this if I didn’t have a K-9,» Mooney said speaking on the stress of the job and the current environment involving law enforcement officers.

Though an expensive purchase at $8,500, and with countless hours of training, Mooney said Arras has been worth every penny and then some.

With narcotic K-9s having to be certified on cocaine, marijuana, heroin and methamphetamine, Mooney said that the week’s training is essential for those involved.

According to the Fayette deputy, the large gathering allows each unit to experience things that they may not specifically see often in their own communities.

As an example, Mooney used the Panhandle regions and their limited exposures to meth.

«Methamphetamines are just starting to get up into that area,» Mooney said. «So they don’t have access to train on it as far as weight goes.»

With that in mind, trainers have hidden different weights of the same drug, from grams to up to 50 pounds, in different vehicles to test the K-9 teams.

The ability for the dogs to accurately find narcotics is a huge asset to the different departments, Mooney said.

«He (a K-9 partner) could accomplish in a minute what three deputies could in an hour,» the Fayette deputy said.

Mooney credited the countless hours of training and working with K-9 partners as key to that success.

«It’s something that we take very serious,» he said.

As a trainer, Mooney said the beginning of the week will be spent recertifying, leaving the end of the week for large-scale, difficult exercises for the teams.

«It’s a beautiful thing for a K-9 handler to get to see,» the Fayette deputy said.

With each exercise, Mooney said that it is fascinating to see the growth of each K-9, which the deputy said was evident after seeing the same teams year after year.

That growth is not only essential for daily police duties, it may also be essential to saving lives.

Noting events that have made headlines in the recent past, most notably police-involved shootings, Mooney said the availability of a K-9 team available is often the best deterrent when a situation gets out of hand.

«I’ve personally been in those situations and, thankfully, I had a K-9 handler or I probably wouldn’t be able to stand here and talk to you today,» Mooney said. «My previous K-9, there is no doubt in my mind that he saved my life.»

That great bond between a handler and a K-9 seems to have bled over between the handlers themselves.

With the recertifying events under way, by the smiles and jokes heard it would seem as if it was a big family reunion.

«It really is a second profession in the career of law enforcement,» Mooney said.