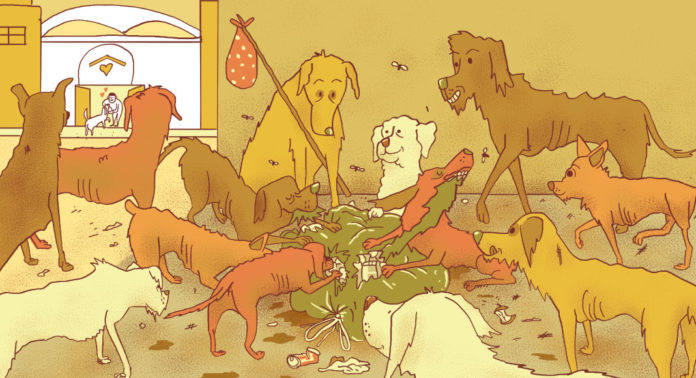 It is estimated that there are one million abandoned dogs in the CDMX, a overpopulation that seeks to be reduced with the adoption

There are an estimated one million dogs roaming in the streets of the big city and, although the authorities are working to mitigate the damage that cause the abandonment of these animals, the chilangos still have a lot to learn.

Specialists in the care of the animals explained that one of the causes of origin of stray dogs is due to the lack of empathy of the mexican people towards the suffering of other beings, a few public policies for protection, and a culture of social responsibility that has been impaired by the lack of values.

“People leave from the dog old man to litters because they are not aware of what animals pass. And, of course, that a dog knows when it has been abandoned,” says Monica Pineda, president of the association People for Animal Defense.
Unfortunately, these animals are seen as objects. You are not given the attention they deserve: health, food, home —and yes, affection—. Are used as articles of fashion, prestige, and even entertainment, are left to their fate in public spaces.

Already in the street, the stress, fear, hunger, cold, illness and anxiety are some of the evils experienced by the dogs that were “thrown away”, and although this may seem incredible, 50% of which are slaughtered provided to their owners, according to data from the centers animal control.

The Secretariat of Health of the City of Mexico was recorded that over a million dogs in the street, “but we estimate that there are three million. The problem is that there is a record accurate or up to date. The official figures say that there is a dog without a home for every seven inhabitants, but we believe that they are four for each one,” adds the protector of animals.

For its part, the organization Mars Petcare Mexico highlights the fact that while the population of humans grows 1.8% each year, the dog makes 2.5% due to the lack of control in their reproduction. A calculation that contributes to a better understanding of the why of overpopulation barking.

Bitch luck
Faced with this situation, there have emerged various civil associations to counteract this problem through programs of rescue, health check for voluntary and temporary shelter, which seeks to encourage the culture of adoption of dogs in the citizens. There are at least 20 centres.
The government of the capital also makes its work through centres such as the Transfer Canine, located in the terminal of The Rosary, of the Lines 6 and 7 of the Metro
—recently inaugurated—, where veterinarians give medical care to the dogs that come to the facility for that transport are looking for shelter from the cold, rain or because they are lost. Subsequently, facilitate its adoption with mass campaigns and dissemination in social networks.

The law dog
In April 2015, including the publication of reforms to the Law on the Protection and Welfare of Animals in the CDMX, where it expanded the legal framework against acts of cruelty, but what is more important is that it opened the door to encouraging the adoption and penalties for those who neglect and, for the first time, banned from leaving them on rooftops or zotehuelas as places to live.

In this facet of the legislation, it was clarified that you could only capture the animals at the request of the citizen, always and when they are suspected of carrying rabies, are dangerous or suffering abuse.

Miguel Angel Mancera, head of Government of the capital, announced some days ago new reforms to the legislation and said that there would be a Care Agency Animal dedicated to quantify on an annual basis the animals that inhabit the streets and create policies that protect, among other actions.

In this new reform, is also established five freedoms for animals: “to be Free from hunger, thirst, malnutrition, —that has to be seen in many of the cases with neglect, freedom of fear, of anguish, that requires a lot of the contact and the active participation of the society,” explained the official.

There are also international standards that protect them, so it is expressed in the Universal Declaration of Animal Rights, which in Article 2 states that: “All Animals are entitled to the care and protection of man”.

Give “paw”
The World Society for the Protection of animals argues that we should give priority to the adoption over purchasing, and recommends that the main thing to help an abandoned dog is to get him off the street, provide care interim as cleaning, vaccination, and, above all, sterilization. If you can not adopt, the suggestion is to give him water and food, even if it is from the outside.

It is not just a matter of the authorities. The chilangos also contribute to worsen the problem. You must start by understanding that a dog is a responsibility that lasts many years and that to adopt it is an act that not only changes the life of a dog, but all as a society.