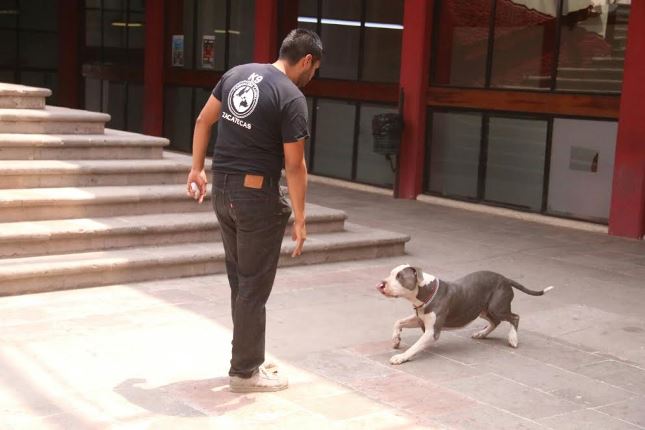 Zacatecas. The Institute of Youth in the capital launching the call Walking the Dog; rejection of the abuse of pets

With the aim of demonstrating against animal abuse, as well as fostering coexistence, the care and adoption of dogs in the street, the Municipal Institute of Youth, led by Luis Eduardo Aguirre Ortiz, launched a call for families zacatecanas to participate in the activity called Walking the Dog.

This activity will take place on Sunday June 4 to 9 hours, in the open-air theatre located in the parque Arroyo de la Plata, the first section, and will be open to the public.

Accompanied by Kattya Trejo Cardenas, head of the Department of Ecology and Environment; Ricardo García Pérez, president of the association Dog Love; Jorge Salas, representative of Proveduzac; coach canine professional Alfonso Rivera Ortiz, Gustavo Ramos, of the civil association Eagle Quarry; and Luis Humberto Aguilar, of the association of Young with Results, the municipal clerk stated the reasons of this hike.

We seek to raise the awareness of young zacatecanos on the importance of the care and the prevention of animal abuse, as well as generate them a culture of adoption based on the care and animal welfare.

“It is important to educate young people about the importance of care in the hygiene and animal health as a public health issue, because 70 percent of the dogs are in street situation and Mexico is the country that has more dogs in Latin america, and their feces contribute to various diseases,” he said.

He stressed the need for people to be responsible and not contribute to the reproduction excessive of the canines, “we need to promote the culture of animal care; we seek a City Educator by means of targeted campaigns that involve the private initiative can be a tool that allows us to build a better society”.

Jorge Salas explained that they have programmed a number of incentives for participants as well as activities, lectures, raffle, food and services aesthetic for the canes, among others.

Ricardo Garcia, of Dog Love, he added that there will also be a display of strength and agility of dogs tamed, and will take some of the dogs that have managed to rescue so that they can be adopted by people who are interested in animal care.

In his speech, the head of Ecology and Environment of the capital, explained that the Center-of-Control Canine and Feline depends on the area; the administrative change, he added, is with the aim of performing cross-cutting activities in conjunction with the ecology.

Invited in the same way that people are interested to bring their pets to the annual day of sterilization to be done this 3 to Saturday, from 8 to 14 hours, in the parque Enrique Estrada, free of charge, as part of the permanent campaign that makes the control center a canine.

Will be participating other associations of rescuers as Cherubs furry, Croquetos and Adopt a pet Zacatecas, among others, that also will have animals for adoption, as well as to apply vaccines, and will be provided information about sterilization.